FIND US!
3
new
Community
Resources
The Easiest Ways to Improve Your SEO Ranking
How achievement & brain health connects us to bliss & growth
How to plan your year (whether you know what your goals are or not!)
11 tips to grow your brand BIG
Previous
RANDOM
Create Your Roadmap to Success
Next

Computer interaction has moved quickly over the years. First there were keyboards, and typed commands. When the mouse came along, it was revolutionary. By moving something in the real world, you could interact with objects on your screen. Mouse pads and tablets also sprung up as alternatives for interaction. Then touch screens came along, and lo and behold, you could skip the middlemouse altogether and interact with the screen itself. 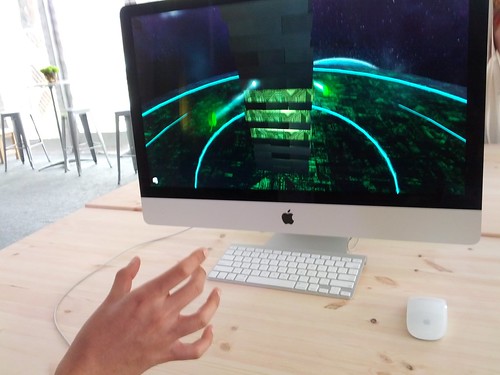 This takes human-computer interaction to the next logical step – using 3D motions and gestures to control what’s happening on screen. Minority Report controls are an oft-used but rather apt comparison. The Leap Motion controller is a small box, smaller than a mobile phone. It sits on your desk, and uses infra-red cameras to track the movement of your fingers (yes, all ten!). You can push, pull, pinch, swipe, poke, brush, wriggle – whatever gestures have been assigned by the program you’re controlling.

Although much has been made of it as a controller for digital art, 3D modeling, or even gaming, there are also many possibilities for office use. Imagine being able to swipe through a presentation with the flick of a wrist, or physically point at something on the screen and have your audience see exactly what you’re pointing at. With nothing more than simple hand gestures, you could zoom in on a chart, rotate a model to provide a different view, or navigate a document.

The beauty is that this technology is made to work with standard computers, like those available in an office. You don’t need special technology like touch screens – simply plug in the Leap Motion, install the software, and it’s ready for use.

Of course, a lot of its potential will come from developers adding support for the Leap Motion, or creating software specifically for it – but given all the interest so far, chances are good that there will be a lot of different applications that utilise the many, many possibilities this little box brings.

Perhaps the future is already upon us.

Leanne Yong is an aspiring author currently working in the field of IT consulting. She loves games, gadgets and technology in general.

Leanne Yong
Leanne Yong is the Leaders in Heels Managing Editor, and a Games Master for an escape room (Next Level Escape). She loves stories and puzzles, and has written four novels.
You might also like
tech gadgetsDesignGadgetsTech
6 golden rules for creating a webinar
How to Start a Podcast – Tips From an Expert
How to select hosting for your website
Should I Start a Podcast? Advice from a podcaster
Get Productive in 2015: Leaders in Heels’ Christmas Gift Guide
Technology Around the Home – Study and Lounge
Interview: Anupam Pathak, founder of Lift Labs
A review of the Bing Food and Drink App
154.1k
32.4k
22.8k

The Easiest Ways to Improve Your SEO Ranking

Giving Endlessly Should Not be the Calling of Your Business

6 golden rules for creating a webinar

How business owners can stay accountable

Why hiring mums is good for your business

10 tips from women working in male-dominated industries
VIEW ALL

Trending
What to wear for business headshots
5938
30 best inspirational quotes about female strength and empowerment
3705
6 Management Styles and When Best to Use Them – The Leaders Tool Kit
2834
Great female leaders throughout history
2342
7 steps of market research before launching a new product
2060
The Importance of Presentation Skills in the Workplace
1818
The Easiest Ways to Improve Your SEO Ranking
Copyright © 2020 LEADERS IN HEELS, All Rights Reserved.
LEADERSINHEELS.COM